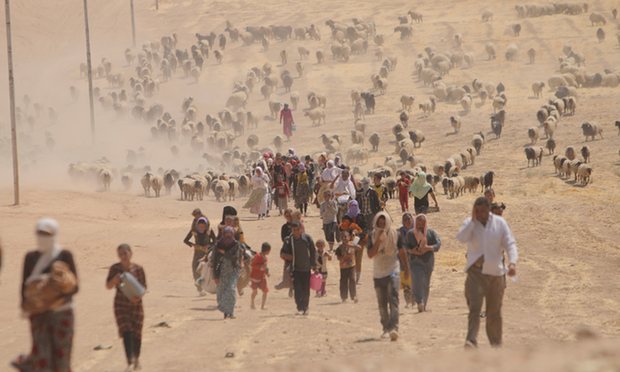 Genocide Against Christians (And How the Church Can Help)

Christians across the Middle East are suffering and dying for their faith, and the United States government has called it a genocide. Here are four ways you, your family, and your church can help.

[EDITOR’S NOTE: This is a guest post from a brilliant friend and leader in our congregation, Ian Speir. Ian is an attorney in Colorado Springs who represents nonprofits and religious organizations. He was a co-author of the comprehensive report on Christian genocide (bit.ly/ChristianGenocide) that was submitted to Secretary of State John Kerry in advance of the genocide declaration.]

When we read about Christian persecution in the New Testament and Church tradition — the stoning of Stephen, the imprisonment of Paul, and the crucifixion of Peter, to name a few — it’s easy to think that this kind of thing is history. For those of us in the West, particularly the United States, it’s hard to think of Christians being jailed, tortured, and even killed for their faith.

The reality is, they are. Every day across the world, Christians are victims of mistreatment and violence. In fact, according to the Pew Research Center, Christians are the world’s most persecuted religious group.

Nowhere is this more true than in the Middle East, where failed governments create power vacuums in which extremists thrive. It’s a toxic environment for Christians, who are often seen as stand-ins for “the West.” In this region — in the very birthplace of their faith — Christian communities are disappearing at an alarming rate, leading even the New York Times to wonder, “Is This the End of Christianity in the Middle East?”

What’s happening to Christians is no less than a genocide, and Iraq and Syria are ground zero. Since the summer of 2014, the so-called Islamic State (ISIS) has waged a systematic campaign of religious and ethnic cleansing in these countries. Christians, and Christianity itself, are being wiped off the map.

The numbers are staggering. Thousands of Christians have been slaughtered, kidnapped, raped, and enslaved. Over 200,000 Iraqi Christians are currently displaced in Iraqi Kurdistan, many living in squalid conditions in temporary shelters and camps, in dire need of food and medical assistance. In Syria, thousands of Christians have been killed and over 700,000 have fled the country since the civil war began in 2011, reducing Syria’s Christian population by more than 60 percent. In both countries, hundreds of churches and other holy sites have been reduced to rubble.

If the trend continues, there will be no trace of Christian civilization left in this part of the world.

Last month, Secretary of State John Kerry used the word genocide to describe what’s happening to Christians and other religious minorities at the hands of ISIS. It was a watershed moment, not just because it was historic (marking only the second time the U.S. government has invoked that term term in an ongoing conflict), but also because it puts a name to the crimes. Officially calling it genocide rouses the public conscience, and says to the victims that we, the American people, will not be a silent witness to atrocities aimed at wiping out these ancient communities.

As much as words matter, though, they’re only the beginning. Will the United States and other countries now take concrete steps to stop the genocide, protect victims, and punish the perpetrators? NGOs and human rights activists are working tirelessly — on the front lines and behind the scenes — to make that happen. But sadly, if history is any guide, the odds are not good. The United States is notoriously reluctant to intervene, even to prevent horrendous atrocities, when its broader geopolitical interests aren’t at stake.

But the American church can and must step up.

Here are four ways for you, your family, and your church to get involved right now in helping persecuted Christians in the Middle East and around the world.

The Bible tells us to “[r]emember those who are in prison, as though in prison with them, and those who are mistreated, since you also are in the body” (Hebrews 13:3). Christians in Iraq, Syria, and elsewhere are our brothers and sisters, and when they suffer, we suffer with them. By praying, giving generously, and getting our churches involved, we let persecuted Christians know they’re not forgotten.